The hot topic in manufacturing these days is additive processes such as “3D printing,” which embodies a half dozen different methods for creating precision parts essentially a molecule at a time. However, there is an additive manufacturing process that has been in use since the middle of the 19th century.

Electroforming creates metal parts by depositing metals, typically nickel, but also copper, silver or gold, onto an electrically conductive pattern or mandrel. E-forming is used to produce flat as well as dimensional parts up to about 250 microns (.010”) thick, 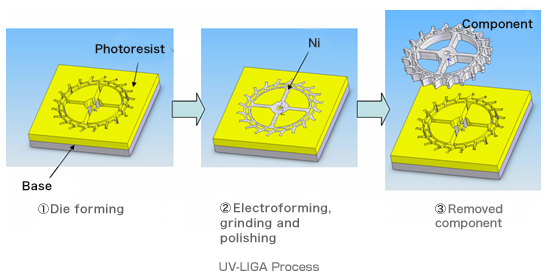 The production of CDs and DVDs is one of the largest uses for this additive process .  For each music album or video or game disk, an electroformed nickel "stamper" is created onto which the polycarbonate material is cast.  The stamper creates the unique pattern of submicron-sized pits in the surface of the disk that encodes the content for the audio, video or game.

There are a number of direct applications for nickel electroforms in aerospace including erosion guards for the leading edges of wings and blades, heat shields and thrust chambers for rocket engines.

This additive process used in a variety of electronics applications as well.  Thin film magnetic heads for disk drives are produced by an exacting method that combines electroforming of nickel, nickel/iron, and copper with lithographic masking.  EMI shielding, test probes, solder paste stencils, heatsinks are among the myriad and growing uses in electronics.

Printing plates are used in the production of currency notes and postage stamps are produced by e-forming, as are molds used to produce plastic optical lenses, holograms, and mirrors.

Among the most diverse set of applications for nickel electroforming is in the production of screens, grids, filters and meshes.  The ability to create very tiny features, holes as small as 2 microns in foils as thin as 5 microns, is one of this process’s most unique capabilities. Perforated products find applications in scores of industries including medical devices, screen printing, batteries, filtration, optical encoders, electric shaver foils, MEMS and food processing.

MEMS (micro electronic mechanical systems) is the marriage of semiconductors with tiny mechanical components such as encoders, gears or actuators of various types.  Photo etching and electroforming are the most capable metal fabricating processes for creating such tiny elements.

Gold and silver electroforms are widely used in jewelry making. The ability to create complex and detailed forms as wax castings to form the mandrels and then coat them with conductive paint  allows the production of pure gold or silver hollow shapes after the wax is melted away.

This versatile yet little known process is finding increasing uses as technology continues its drive toward smaller and smaller devices.  Although there are a relatively small number of dedicated electroforming job shops (fewer than 70 by our count), photo etching and electroplating facilities also provide this service.

Based on many conversations I have had with customers who are looking to solve some really small-scale problems, photo etching and electroforming are capable but unrecognized technologies for creating a broad variety of precision metal components at very delicate scales.