Ferric chloride is the most widely used etchant for commercial chemical etching facilities.  It is comparatively inexpensive, safe to use, consistent in etching performance, and versatile in etchable alloys.

Fe3Cl is versatile and effective

It is especially well-suited to etching the white metals, which include the iron- and nickel-based alloys, as well as zinc, manganese, indium and tin.The primary iron-based alloys include stainless, carbon and silicon steels.  Kovar and Invar are iron-nickel alloys often used in etched electronics packaging applications.  Alloys whose major fraction is nickel include Alloy 42, Inconel, and Mu-metal.  Although ferric chloride will not directly each certain pure metals including cobalt, chromium and tungsten, these elements may be present up to certain fractions in iron or nickel alloys and they will be etched.

Using ferric chloride to chemically etch white metals produces a smooth side wall with a consistent and predictable etch rate.

For more details on the photo etching process and its capabilities, the Comprehensive Guide to Photochemical Machining is available for FREE:

Another benefit to using ferric chloride is that it can be regenerated in process.  Instruments within the etching process monitor the chemistry on a continuous basis.  At specific thresholds, the etchant is refreshed by injections of muriatic acid, chlorine and water.  In this way, the etchant bath life can be extended to several weeks.

Even after several weeks of etching white metals, ferric chloride continues to be useful.  It can be modified to be suitable for etching red metals.  Red metals are copper based, and include primary coppers, brass, bronze, Monel, nickel silver (a copper alloy that actually contains no silver at all), and some specialty alloys.  Again, the condition of the etchant is monitored automatically and refreshed as needed.  In this way, the life of the original etchant is extended for several more weeks.

After the ferric chloride has done its work etching white and red metals; it is reconfigured one more time to etch aluminum.  Aluminum is a very light metal, about one-third of the density of the red and white alloys.  It is also very reactive and wants to oxidize readily.  The modified etchant is suited to this task.

From an operational point of view, ferric chloride is fairly benign to work with.  Casual exposure does not cause injury and is readily remedied with water.  There are etching chemistries, both acid and alkaline, that will cause significant injuries on contact, and one hydrofluoric acid, that can cause death.  Ferric chloride has none of those risks.

We have alternative etchants that are effective for silver and molybdenum.

Chemical Etching at the Atomic Level

To explain how the etching process works requires a little trip back to high school chemistry class.  The smallest particle of an element (such as iron, nickel, copper, aluminum, etc) is an atom.  Atoms are composed of protons, neutrons and electrons.  Ions are atoms that have an unequal number of protons and electrons.  Metals ionize by shedding electrons, making them into positively charged cations.  Non-metals ionize by gaining electrons and becoming negatively charged anions.

Ferric chloride etching solution contains iron in the +3 oxidation state (meaning it has lost three of its 56 electrons) and chlorine with an extra electron forming the chloride Cl-.  The etching process is essentially the deconstruction of the elements in the metal alloys at the atomic level.  The cations gain electrons from the exposed metal atoms and then the anions bond to the exposed atomic nucleii. 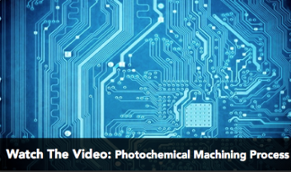 These non ferric alloys can be etched with other solutions which are sometimes combinations of different acids like sulfuric, nitric, hydrochloric or phosphoric.  Or, when the etching facility is especially equipped for containment and safety, hydrofluoric etches just about everything.

Although regeneration and re-purposing of the ferric chloride etchant extends the life and usefulness of the etching solution, it does have a side effect.  The process actually increases the overall volume of the etching solution by several times.  After the etchant is consumed, the spent solution is neutralized.  The dissolved metals are precipitated out and sent for refining and recycling. The remaining liquid, which is basically water, is treated and can be recycled as well.

The Comprehensive Guide to Chemical Machining