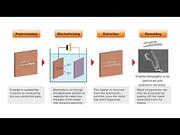 Additive processes are the hottest topics in manufacturing these days.  The ability to "grow" metal and plastic parts, essentially a molecule at a time, is going to change the way a lot of things are made and vastly increase the kinds of things that can be made. It really is a very exciting development.

Lost in all the hue and cry about 3D printing is any recognition for an additive metal fabricating process that has been in use for more than 150 years. Electroforming is the process of depositing metal, typically nickel, from a metal salts solution onto a conductive pattern.  The mechanism that drives the metal out of solution is an electrical charge applied to the pattern that attracts the nickel ions.  The nickel continues to deposit on the pattern until the electrical charge is removed.

This process is nearly identical to the more well known process of electroplating.  Except, the objective in "e-forming" is to make precision metal parts, not just coat them.

Electroforming is capable of producing structures as thin as 5 microns (.0002") up to about 250 microns (.010") typically.   Thicker structures are possible with special fixtures. Mold makers often produce mold inserts up to 1/2 inch thick, but it takes months!

The most frequent applications involve things that need really small features.  Screens that have holes as small as 3 microns; parts that are smaller than 250 microns are possible with this process.

Unlike photo etching, which has dimensional constraints driven by metal thickness, electroforms can be thicker than their minor dimension.

The process shares some of its steps with photo etching.  The conductive patterns, often called templates or mandrels, are produced by coating a piece of metal, often brass, with photo resist and, using a phototool, exposing images of the opposite of the parts on the sheet.  In this case, we are creating the outlines of the parts in resist and leaving bare the metal where the parts are to be "grown."  Multiple layers of resist can be applied and developed to allow the metal deposition to increase in thickness.

The "grown" parts are peeled off the template ready to use.  The template can be used multiple times before it needs to be stripped and rebuilt.

Although nickel is the primary metal used for industrial electroforming, copper, gold,and platinum are also suitable for the process.

Some of the better known applications for nickel e-forms include mold inserts, master stampers for CD/DVD manufacturing and some high end brand identification ( think Mercedes, BMW, etc).  But, the future of the process is going much, much smaller than that.  MEMS, micro-electro-mechanical-systems, encompass a range of sensors and actuators combined with microelectronics in devices barely the size of a grain of rice.

A range of scientific, medical, optical and industrial devices (including 3D inkjet printers, BTW), may require nozzles, screens and apertures with very small openings, often less than 25 microns (.001").  Even microdrilling, both mechanical and laser-based, has a minimum limit of about 50 microns (.002") in hole size.  And both processes make only one hole at a time.  Electroforming can make many parts, with as many holes as needed, all at the same time.

Creating three dimensional surfaces, such as stampers, molds for fresnel lenses, assay arrays and a host of emerging applications around "nanotechnologies" can benefit from the ability of the process to accurately and consistently reproduce complex dimensional surfaces, as well as highly precise miniature mechanical and electrical components.

If you are interested in learning whether the process can be useful to you, download our FREE guide: