Photo Etching vs. "the Others"

Photochemical machining is the industry's preferred moniker for this metal fabrication process.  It is also readily called photo or chemical etching,  The process derived from the then-nascent printed circuit board industry in the 1950s. The fabrication steps are nearly identical.

More recognized processes such as metal stamping and punching utilize hardened steel tools to shape metal parts and have long histories in metal fabrication.  Plasma, laser and water jet cutting utilize directed energy to shape parts. And, wire EDM uses a wire electrode to burn away metal. In these cases the evolution of CNC (computer numerical control) in the 1970s allowed part geometries to be programmed directly into cutting machines.

The most "traditional" processes, stamping and punching, are sort of "brute force" processes, shearing metal using powerful presses.  Plasma, laser and EDM rely on intense energy, literally burning their way through metal.  Waterjet is sort of the "hot knife through butter" option, but you definitely wouldn't want to get in the way of a pressurized stream of water that can cut through an inch of steel!

Photo etching, in contrast, would be like running a sheet of metal through your dishwasher and then taking out a sheet of parts.

Photo etching is deemed a "non-conventional" method that fits alongside plasma, laser, waterjet and wire EDM for manufacturing many types of metal parts.

The more well-known fabrication methods have their own sets of undesirable side effects.  Stamping and punching produce burrs from the shearing forces, and often cause "cold working" of the metal that may need to be alleviated by annealing. Plasma, laser and wire EDM impart significant heat into the work material.  Plasma operates at about 25000 deg F; laser and EDM typically between 2500 and 5000 deg F. In these cases, the side effects of the intense heat include what are called "heat-affected zones" or recast layers that need to be rectified by secondary processes.

Photo etching completely avoids all of these side effects. The maximum temperature metal is exposed to in etching is 165 deg F. In addition, etching is particularly capable with very thin materials (routinely down to .001")--which is beyond what is in the comfort zone for the other processes. Etching is also very capable with regard to both reflective and thermally conductive metals such as aluminum and copper, which can be problematic for lasers in particular..

Here's a quick run down of etching specs and tolerances.

The photo etching process is used for fabricating metal parts for many different industrial applications including sensors, shields, retainers, flat springs, strain gauges, filters, screens, grids, shims, gaskets and more. For electronics, etching is used to produce a host of metal components used in RF, microwave and wireless applications, as well as lids and leadframes for microelectronics packaging.  Photo etched direct bond copper is increasingly used in power electronic applications, particularly in wireless devices. It is also used to produce a host of electrical contacts, buss bars and other electrical interconnect devices.

Get the picture here : 3-minute video shows the process


Photochemical machining can be a very economical alternative to stamping, laser or EDM. With inexpensive film-based tooling that can be produced in a day, rapid prototyping is easily achieved.  Order minimums are modest and can produce dozens to hundreds of parts at low cost.

To help engineers and designers in their design-for-manufacture (DFM) decisions, we have published a basic DIY Guide to Estimating Photo Etching Costs.  It's Free! 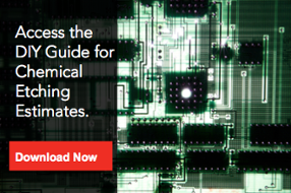 From Data to Details

The basics of the process include creating the photomask, which today is derived from CAD data and output on film from a laser photoplotter.  This is known as the phototool.  The metal to be etched is carefully cleaned and coated on both sides with a polymer film called photo resist.  When applied, the photoresist film is unexposed and this must be done in a yellow safe-light environment. 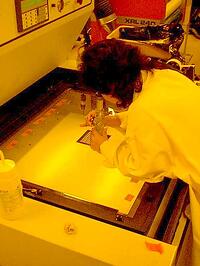 The coated metal and the phototool come together in the imaging process where the black regions on the phototool prevent the exposure of the resist under intense UV light.  The unexposed resist is washed away in a developing solution, leaving bare metal in the areas to be etched.

In the etching process, the exposed photoresist is strong enough to withstand the effects of the ferric chloride etchant.  But the unprotected metal is dissolved right up to the edge of the resist.  The etchant is sprayed at both sides of the sheet until cut through is achieved.  After etching, the resist is washed away in a different solution.

Applications for Every Occasion

Do you have a project in mind?