How do Photo Etching and Laser or Water Jet Cutting Compare? 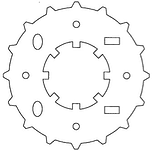 This little part recently starred in Conards new video about photo etching.  CC Star, as we call it, is 2.7 inches in diameter and is .020 thick stainless steel.  Just to satisfy our own curiosity, we asked other types of metal fabricators to quote this part.

Laser and water jet cutting technologies are fast, flexible digital solutions for cutting metals and a variety of materials.  Lasers use combinations of collimated light and gas to burn a path through material.  Water jets use either pure water under very high pressure or a slurry of water and abrasive to scour a path through material. In both cases, digital controls guide the cutting heads.  And, in both cases, the cutting beam must trace all of the features of the part in a linear fashion as if you were tracing with a pencil.  (As a practical matter, the cutting paths are often segmented, but the entire path must be covered.)

Neither lasers nor waterjets require hard tooling.  Both require programming, which is a simple matter of software these days.  While lasers are generally faster than waterjets, the actual cutting speeds of both technologies is dependent on a number of factors: type and thickness of material, size and shape of the part, tolerances required, and the power of the equipment itself.

In .020 stainless, CC Star might take 2 or so minutes on a waterjet and about 45 seconds on a laser.

Photo etching requires what is sometimes referred to as soft tooling. Phototools are images of the parts on film.  At the beginning, the process of preparing the tooling information is similar to the programming of a laser or waterjet.

To produce the phototool, the designer takes our CAD file and adjusts the dimensions to account for the etching allowance.  This compensated image is stepped-and-repeated to fill a designated sheet of material.  In this case, we chose an 18 x 24 sheet, which allows us to etch 48 parts per sheet.  The resulting file is output to a laser photoplotter to produce 2 sheets of film at 8000 dpi resolution.  The 2 films are precision aligned and punched for registration.  End to end, the process takes about 2 hours, including the plotter time.

After printing and developing, the metal sheets go into the etching line, one after the other, making about 800-850 parts per hour, regardless of how complex the part is.

When part geometries are complex, photo etching is the better choice because the rate of production is not affected.   If the part had been a simple disk, etching throughput and cost would be exactly the same.  For the same size disk, the throughput rates for lasers and waterjets would be faster.

Awareness of laser and water jet cutting is widespread.  There are more than 6,000 metal fabricators in the US; the vast majority of which utilize digital cutting technologies.  Despite its emergence in the 1950s as means of fabricating metal parts, and long before the digital age, photo chemical etching is still a little known process.  There are barely 100 etching companies in the US and only a few hundred in the world.  Photo etching is very capable of working with the very thin materials and fine design details that  are in growing demand in a range of industries.

If you have any questions about photo etching, please contact me at 800-443-5218 or click below to email me.