What is the difference between Photo Etching and Metal Stamping? 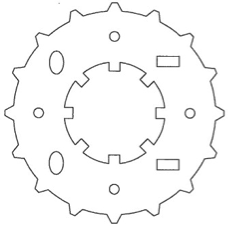 This little part recently starred in Conard's new video about photo etching.  CC Star, as we call it, is 2.7 inches in diameter and is .020 thick stainless steel.  Just to satisfy our own curiosity, we asked other types of metal fabricators to quote this part.

The metal stamping company quoted about $10,000 to $13,000 to make the hardened steel tooling to produce CC Star.  The lead time for the tooling was 6 weeks.  The cost of the phototool we would use for etching would be $235.  The lead time would be one day.  So far, the difference between metal stamping and photo etching is $12,765 and 41 days.

The stamping tool is kind of a big deal.  Just the steel, wire EDM service and heat treating for this particular part will run between $6,000 and $9,000.  The tool maker figures between 80 and 100 hours of labor for prep and assembly.  A die-makers time is worth $60-$80 per hour.  So, a rather strenuous undertaking to produce a smallish metal part.

Once the stamping tool is complete, it needs to be set up in a stamping press. If the stamping house has adopted SMED practices (Single Minute Exchange of Dies), the installation and alignment can be done fairly quickly. It could also be a more involved process.  Once the tool is installed, set up pieces are run and the press is adjusted to produce the parts correctly.

To produce the phototool, the designer takes our CAD file and adjusts the dimensions to account for the etching allowance.  Its a formulaic process where outside dimensions are made a little bigger and inside dimensions are made a little smaller by a ratio related to the metal thickness.  The designer then adds connecting tabs, if required.  This compensated image is stepped-and-repeated to fill a designated sheet of material.  In this case, we chose an 18 x 24 sheet, which allows us to etch 48 parts per sheet.  The resulting file is output to a laser photoplotter to produce 2 sheets of film at 8000 dpi resolution.  The 2 films are precision aligned and punched for registration.  End to end, the process takes about 2 hours, including the plotter time.

In photo etching, after the plate is exposed in printing, the sheets are sent through developing where the unexposed resist is washed away.  The developed sheets go into the etching line, one after the other, making about 800-850 parts per hour.  6,400 or so parts per 8 hour shift.

From a tooling and process standpoint, the photo etching and stamping processes are very different.

Lets look at the cost differences between chemical etching and metal stamping.

In this particular case, due to the complexity of the part, the amortization of the stamping die expense would require up to 1.3 million parts to be made.

If you are ready to find out how your application compares:

The Comprehensive Guide to Chemical Machining